Scroll down to discover KLUDI 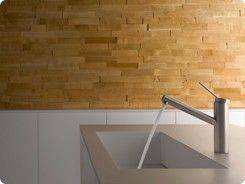 Menden, 2014 – No other material is as elegant and robust and radiates quality quite like solid, high-grade steel. The KLUDI TANGENTA single-lever sink mixer combines these qualities with fine structures and consistently purist design. Whether with a swivelling or a retractable spout or an adjustable rinser spray – the cylindrical kitchen mixer taps emanate an unsurpassed sense of premium value, while proving themselves as highly practical tools for the kitchen at the same time. The KLUDI TANGENTA mixer taps can be installed in kitchens as a classy eye-catcher and, with their fair value for money, they represent a prize article of affordable luxury – as the specialist for kitchen mixer taps from the German Sauerland, this is KLUDI’s goal.

Solid quality and a fine appearance
KLUDI TANGENTA stands for the utmost in function, safety and durability. The single-lever steel sink mixers in this line impress with their consistently purist design and clearly demonstrate: less is more. There is nothing to distract the eye as everything is concentrated on the superior material and uncompromising practicality – just as you would wish in the kitchen. The aesthetic appeal of the mixer taps is obvious every time you see or touch them. They are streamlined and stylish, and fulfil their purpose, instead of getting in the way. The mixer body is manufactured from a single piece of solid high-grade steel and the components are integrated seamlessly. The slim spout, the delicate lever and the discreet lever cap form one homogeneous whole with the body.

Extremely long-lasting and hard-wearing
KLUDI TANGENTA remains unchanged. The base material of the components is solid, high-grade steel in its purest form. Thanks to the robust, stainless steel, the single-lever mixers retain their appearance and remain a reliable tool in the kitchen even after many years of intensive use. They can withstand both high thermal and mechanical loads and are extremely resistant to corrosion. It goes without saying that this steel model is manufactured in stainless steel. The very finely brushed finish of the mixer taps prevents build-up of limescale deposits, they are easy to clean and stand out with an unrivalled level of hygiene.

Three models to suit every situation
KLUDI TANGENTA is available in a choice of three different models. The basic model comes with a swivelling spout, which has a radius of 360 degrees. The model with the retractable spout adds to the range of possible actions at the sink. The model with a rinser spray is also practical: pull the hose out, rinse the dishes off using the spray and let the hose retract into its original position.

Kludi GmbH & Co. KG, based in the Westphalian town of Menden, is a German specialist in the field of bathroom and kitchen tap and shower systems. Kludi’s brand claim “Water in Perfection” defines its ambition to create top quality. The bathroom fitting range is based on two key elements. It offers clearly defined styles under the heading “Smart Luxury”, while “Pure Function” combines solid quality with great practicality in functional fittings. Matching “Shower Dreams” concepts are available for both bathroom ranges. In the field of kitchen fittings, Kludi presents a wide range of products in the “Kitchen Competence” series.

For almost 100 years, the internationally active family company has been influencing the use of water in the household with groundbreaking fitting concepts and innovative solutions for kitchens and bathrooms. More than 1,000 staff members in the Kludi group develop, produce and market products for specialist trade and craft companies in numerous countries around the world. From its headquarters in Menden, the Kludi company group manages 13 international sales organisations. The products are manufactured in three European production facilities. The company runs its own production facility in the United Arab Emirates as a joint venture.